It’s why I do it. Advocacy. It’s why my own trauma is kept alive and raw. I don’t get to pack it away, hide out… heal? As if I could… Cause countless other souls, without my media presence LIVE daily with THEIR pain. And they may not have found counseling or meds or understanding.

A LOT of them pull the pin. Cut away. Daily. So my angst will remain unburied…in service to ALL who have not been so fortunate as I.

Believe that you DESERVE to still BE.

Seek a source of counseling and guidance.

I’ve just responded to a lengthy letter received recently from a senior Army officer who lives with PTSD, who had seen one of the videos or speeches I’ve made in recent years about this condition…and she felt that someone was speaking to her, rather than at her. I was grateful for the kind words and the sense of having been of use…but the timing seemed synchronous. Tomorrow, Sep 14 is the 51st anniversary of my ReBirthday. I’ve felt pretty stable coming into this time…yet a year ago, I got cocky; attended an old friends anniversary party and came completely undone! Had to leave, shaking and in tears. So you never know.

I only realized halfway thru the letter that it was from a woman. It had mentioned husband. Given her past assignments I assumed it was a gay couple. That’s the thing about modern wars. Our forces are comprised of men AND women. And nowadays EVERYONE is in harms way!

I enclosed two essays. One describes what happened to me, 51 years ago. The second describes an event 10 years later…that I now believe was the trigger that began my descent into depression. I’m gonna enclose that here tonite. That’s the reality people who’ve been traumatized by some event must live with. A Trigger can be incredibly devastating. Enjoy…if that’s the right word.

For whatever reasons, on this Christmas Day I’m remembering an Easter Sunday years ago. I recently heard a spiritual, “Precious Lord, Take My Hand” and flashed back to the late ’70s, when I was performing in MAHALIA, a musical play based on her life. In the first act, I was a member of the choir and other supporting characters; in the second act, I was Minnis, her third husband. Minnis was a jazz pianist, a charmer and a philanderer.   When preparing the character, I struggled to find that emotional connection between him and Mahalia.  She was obviously wealthy and renowned, but hardly an object of physical desire.

I thought back to a preview performance I’d seen years before, of a musical called SOON. The cast included Barry Bostwick, Peter Allen and Richard Gere.  During that performance, an actress appeared on stage and ascended a staircase to a single spot-lit balcony.  She was rather short, rather stout and not particularly attractive.  Then she began to sing.  And in that moment, she became the most beautiful, the most desirable, the most compelling woman in the universe. In a theater seating hundreds, she sang to me.  Each member of the audience had that same experience; her voice, her music, her message was received individually.  Her name was Nell Carter.

That memory explained why Minnis loved Mahalia, loved her on every level. Her art, her majestic gift transcended mere physical attractiveness and made her all things desirable.  And during the run of this musical (written by John Lewis of the Modern Jazz Quartet) each night my character Minnis fell in love with Mahalia, who was performed by the incomparable Esther Marrow, herself a Mahalia protégé.

I was then living in NYC and our performances were in Stamford, Connecticut; which meant a daily drive or train ride to the theater.  I’d arranged the rental of a station wagon and a number of the cast shared that drive each day. It was a time of fellowship, jokes, bickering; the animated energy generated by a theatrical troupe.

Today was Easter Sunday.  I then lived on Central Park West and I had my pre-show rituals.  My day would begin with a walk along the park to buy the Sunday Times, while reflecting upon last night’s performance and my intentions for today’s matinee and evening show.  The morning was warm and sunny, the work was going well and I was looking forward to really nailing my featured love song to Mahalia today.

There’d been some drama in the past regarding my inclination to venture from the notes written and to improvise.  I’m not a Broadway baritone, not even really a singer in the true sense of the word. (You’d be surprised how being shot thru the throat affects your voice.)  But I am musical and a fairly interesting actor. So each show, I walked that fine line of fulfilling the intentions of the composer and fulfilling my own need to express the truth of my character. I’d tell them, “Well, Esther improvises…”  And they’d then tell me, “Well, yeah…but she’s ESTHER MARROW !”

As I approached the newsstand on the corner of CPW and 100th St, I noticed two young men exiting the park and running across the street toward me.  One wore a red windbreaker.  They seemed Hispanic – or is Latino more correct these days?  As they reached my side of the street and stopped ten feet away, one cried out to me, “You killed him. You killed him.”  The other drew a revolver from his waist, cocked it and aimed it at my chest.

Time stopped, as it does in such moments.  One takes in everything.   EVERYTHING.   The smells, the light, the sounds are all super-heightened, the ultimate Kodachrome. I wondered, in abstract, whimsical dispassion, “Does he mean Jesus? It is Easter Sunday…” And then he pulled the trigger.

Imagine standing inside a wind tunnel, yet within the eye of a hurricane.  Everything about us roared and swirled, but this microcosm was absolute stillness and silence.  There was a click.  The sound of a hammer striking…what?  A faulty cartridge?  A damaged firing pin?  An empty chamber?  Only God knows and he ain’t talkin’.  His friend said, “Man, man, man – you fuckin’ up!”  In those instants, I’d taken perhaps one step towards them, perhaps two…and have no idea what I intended.

They proceeded to wheel about, race back across CPW and disappear into the park.  I stood there for some moments.  There was no one around.  No one.  I collected myself, entered the corner newsstand, bought my Sunday New York Times and walked back to my home.  There, I called the police and told them what had happened.  They eventually came by; I gave a report and they left to search for the pair.  They told me, “You were menaced.”  Curious, the subtle difference between menaced and murdered…just an unreliable weapon.

In subsequent years, when I recounted this experience, friends (knowing something of my temperament and history) asked, “So, what’d you do then?  Did you take his gun and pistol-whip him and beat the snot out of them?”  I’d tell them that life is seldom like a movie.  That I simply stood there, remembering close calls in Vietnam, grateful that this encounter had ended so well.

After an hour or so I picked up the rental car, met my cast members and began the drive to Stamford.  I don’t remember discussing the morning’s events – not sure why.

During Act One, as we began to sing “Precious Lord, Take My Hand”, I suddenly broke down in tears – just lost it, right there on stage in front of everyone.  I was led backstage by someone; and there sobbed and sobbed, inconsolably.  There was a discussion…could I continue, could I regroup?

They covered for me til the end of the first act and during the intermission, I got my own act together.  Act Two proceeded without incident…and I seem to recall I sang my solo rather well that day. 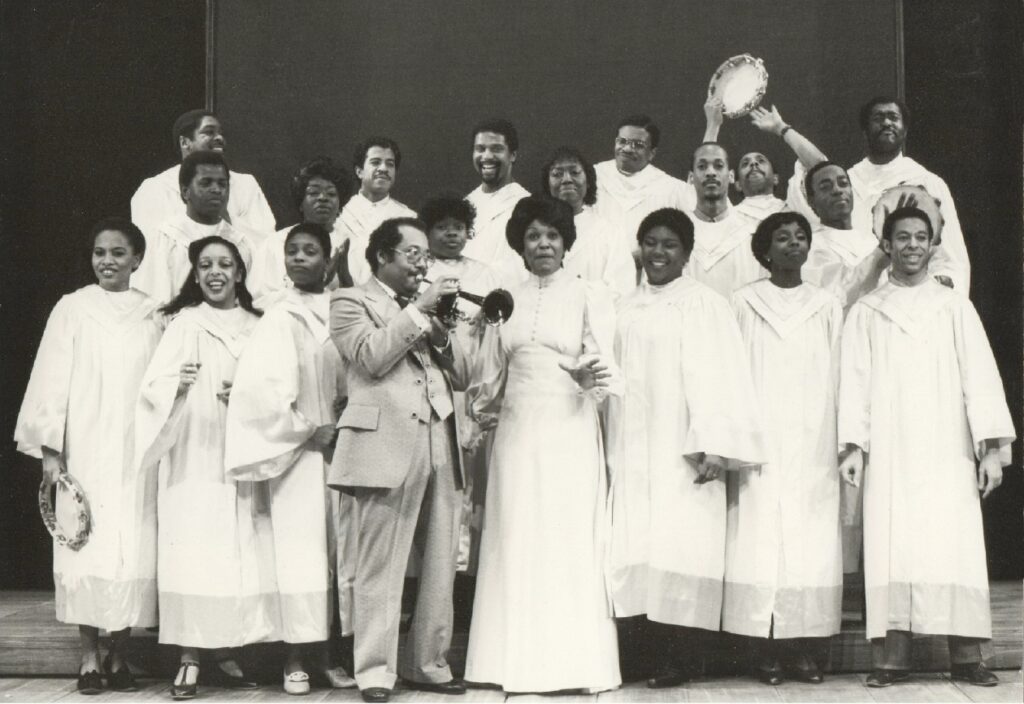