I’d noticed on my itinerary a change of planes in Dallas.  “Hmmm,” I thought, “A private jet to bring us to Carlsbad New Mexico.  Nice.”    Private jets are invariably a pleasant experience.  I remembered golfing fundraisers years ago and being flown out of Van Nuys Airport, just minutes from my home to Palm Springs or Tucson.  Parking my car, handing over my clubs to a valet, signing a register, enjoying a cigarette on the tarmac as our plane was loaded.  And then…simply walking on.  Lemme tell you, after all the security changes following 9-11, THAT sort of treatment is experienced as true luxury!

BOUTIQUE AIR sounded posh…but existed at a totally different area in the Dallas-FW Airport, requiring an SUV to fetch me.  My itinerary hadn’t mentioned that…or provided a phone number to reach this SUV.  American had seized my carry-on (I mean, they fucking SEIZED IT!)  “This flight is full!”  Well, THAT was bullshit…but “don’t make a fuss, Tucker!” TSA is verrrry testy nowadays.

Realizing I had zero reliable guidance for this next leg, a generous AA counter agent GAVE ME THE PHONE NUMBER for Boutique!  Yeah!  Without that kindness I might still be waiting for that SUV!  She also assured me that AA would ensure my carryon would be transferred.  I calmed down. Once outside the terminal, I called the number.  Like five times.  Each time, “It will be right there, soon!”

“Well, sumbody gonna get an asskicking if I miss my connection, dude!”  After being instructed to go DOWNSTAIRS to wait (and thank you for that guidance) a black SUV arrived.  We quickly exited this terminal and drove for a while to a separate much smaller terminal, some distance away.  I thanked him, grabbed my bag and entered a small facility housing several regional carriers including Boutique Air.  Found the counter, checked in and slipped out to the tarmac for a quick smoke.  “Whoa!  Are you serious?”  There is a single small plane out there… with a propeller on its nose.  ONE PROPELLER.  Da fuck? I talk myself down.  “Tucker, this is what’s up.  Deal with it.” 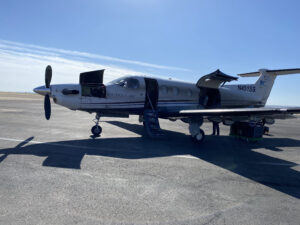 There were several other people waiting in the lobby.  During my check in, not only was my luggage weighed (yes, it had been found and brought here…) but the dude asked me how much I weighed!  Are you serious? Is our shit that specific? 168, I told him…hoping I hadn’t put us over the planes limit!

Eventually we boarded, eight of us.  Single seats on both sides of the aisle.  I found myself directed to the rearmost seat.  It was somehow suggested to me that seating me there was optimal for our weight distribution.  MOTHER OF PEARL!  That is some critical shit!  I secured my seat belt and sussed the interior space for exits and access.  Hmm!  Kinda fucking doubt ANYBODY will be exiting this puppy if we go down!  I notice the two pilots ahead, going thru their checks.  And I am grateful to be momentarily distracted by a memory. 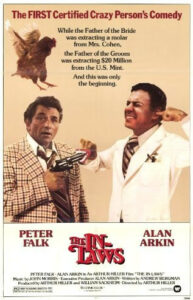 THE IN-LAWS was a wonderfully funny film from 1979, starring Alan Arkin and Peter Falk.  Their children are getting married and they’re going to the wedding destination.  Falk is a rogue CIA agent, discharged for having been mentally unstable.  Arkin is an accommodating dentist.  In the plane, both their pilots are Asian, former pilots for Chiang Kai-shek. Falk had worked with them in the Cuban missile crisis.  Rent it, you’ll thank me!

Both of our pilots are also Asian.  So I use this coincidence to calm myself.  I am committed to shooting MY film.  I am committed to taking this flight.  And I am committed to suppressing my fear and suspicion that something wretched is about to happen.  We fire up the prop, taxi out to the runway and get in line.  Ahead are several much larger planes, jets actually.  Eventually it’s our turn and sounding suspiciously like a high-powered Deere lawn mower, we proceed down the runway.  We lift off.  Then we waggle in the air…meaning the right wing dips…then the left wing dips…but neither wing tips encounter the ground. 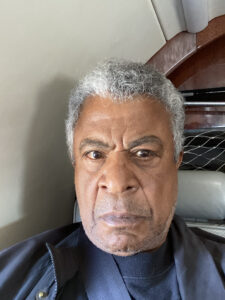 There will be considerable dipping for the next 55 minutes.  The first 500 feet of elevation has much chop; winds suddenly lifting us up…and the dreaded drop, like a rug pulled out from under us.  We never do fly higher than 2500 feet so the view is nice…I guess.  Its mostly brown scrub and dessert; occasionally a golf course or community with lawns and pools.   At cruising altitude we’re pretty stable in the air and I begin to relax a bit. I take a couple of photos…of the cabin interior…and the concern in my own face.  Eventually I notice the ground getting closer and realize we are making our descent to land.  There is a goodly amount of swinging around in the sky directionally to align with the runway…and as we descend, we reenter the chop. The unstable air. The sudden lurching.  The sudden surges.  Hmmm.

That is A LOT of fucking movement, people, little of which is level… forward OR laterally.  The ground approaches.  Our plane sways in the air,  side to side…and front to back.  Well…here we go.  And our pilots set us down SO GENTLY, SO PRECISELY the entire cabin erupts in spontaneous applause!  Yes, we were grateful.  But also admiring.  THAT was some precision shit!  I resist any intention to kiss the tarmac; that would be dramatic overkill.  But I do walk down those plane stairs with gratitude.