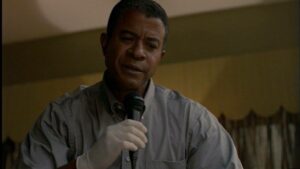 ‘Goodbye Charlie’ deals, primarily, with assisted suicide as its narrative and, did so at a time when the debate surrounding it was not widely had. Was there an awareness amongst the cast and crew of Millennium that the stories they were telling were groundbreaking for the time.

I discovered after it aired that viewers came down on the side of their pre-existing positions on assisted suicide.  If in favor, Kiley was perceived as an angel; if against, as a demon.  At the time, it was controversial in the sense that Glen and Jim always write provocative, resonant stories

The premise of the episode sees the two protagonists charged with the task of deciding if Kiley is an angel or a devil and the denouement is intentionally ambiguous with regards to this, allowing the audience to draw it’s own conclusions. When building a character such Kiley, is it necessary for the actor to make a judgment regarding the character’s motives in order to portray him?

I think that goes without saying, that an actor must always have a clear point of view abut his character.  I am pro-choice in all aspects of that concept and was always clear that my work was involved in service to humanity.

It is very much a hallmark of Glen Morgan and James Wong’s work to pair the intense with something decidedly at odds with that, in this case murder by karaoke. Is it difficult, as an actor, to portray the necessary menace of the scene whilst delivering a musical number? 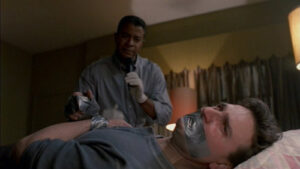 You’ve described their process quite aptly…and humor is a complimentary ingredient to darkness. There was no menace; remember, Kiley is in service to humanity, his acts those of mercy.

One of my favorite scenes in the episode takes place during Kiley’s interrogation, namely, when Kristen Cloke’s character dispenses with her attack of Kiley to beg for his assistance in understanding her own particular facility. Do you think this was a commentary on the central issue of the show, assisted suicide, in that it is much easier to maintain a sense of social morality until such time as the matter at hand begins to affect you personally?

As in all things, there is what is theoretical/intellectual and that which is pragmatic and present.  Ask inhabitants of war zones how their reality affects their perceptions and values

Another particularly intense scene involves Kiley subtly manipulating a character into considering suicide as an end to her torment. When you portray scenes as intense as this is it difficult to divorce your own feelings about the scene and adopt the feelings of the character who believes, in this instance, he is committing an act of good?

Just so.  Kiley had a gift and the clarity of someone comfortable with the many aspects of what it is “to be alive”.  Having faced and accepted my own death (in Vietnam), having seen the other side and knowing that our life here is one of many phases of existence, I was without conflict.  What might have been interesting would have been to portray a character whose choices are antithetical to my own.  But our craft requires us to be “justification machines”; we always seek the ‘self’ in every character we create.

‘Goodbye Charlie’ strongly hints at a supernatural facet to the character and I wondered if it was ever stated to you what the true nature of Steven Kiley was and what your own feelings on this issue are?

The script was the script.  Such choices are left to the actor.  And its tricky to try to play someone supernatural, just as its tricky to play a king or a god.  You make your choices and rely upon FX and ambiguity to win the day.  In the end, it’s up to the viewer to make such judgments.  The episode was filmed in a former psychiatric hospital and criminal asylum in Vancouver.  I have had some experience in clearing spaces with anomalous presences.  There were definitely corridors in that hospital with a great deal of activity.  Between set-ups I would wander about and marvel at the sudden changes in temperature, at times, entering a passageway and quickly deciding not to walk along any further…and how could there not be such energy, considering the history of this place.

Throughout your career you have had the opportunity to portray a number of sci-fi or genre characters and I wondered how the experience of working on Millennium compared to other franchises and if Millennium were to be adapted in a movie format would you be interested in contributing to it in some way?

Millennium had in common this with S:AAB, The X-Files and The One – all were written by Jim Wong and Glen Morgan.  That commonality insured a positive creative experience.  I can’t imagine how Kiley might figure into a film but I’d jump at the chance to work again with Lance and Kristen.

What should fans of your work keep our eyes and ears open for in relation to the continuing career of Tucker Smallwood?

BLACK DYNAMITE, a parody of blaxploitation films premiers this week at Sundance (I am a corrupt congressman – sound familiar?)  In February/March, I’ll travel to Fresno State for a month to perform in The Piano Lesson and teach a few classes.