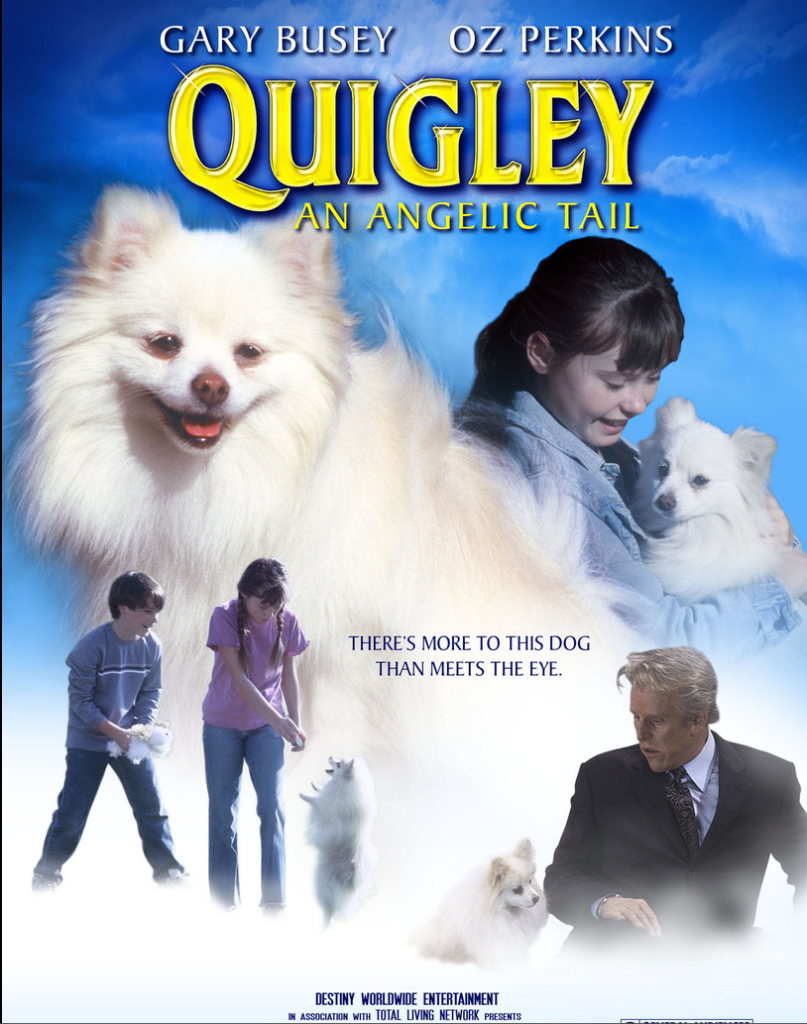 This is an amazingly low end project to which I find myself attached; a film budgeted somewhere around $750,000-$1,250,000.  That’s lunch money to the studios, but apparently this producer liked the sentimental script, persuaded Gary Busey to star in it and raided somebody’s piggybank.  It’s the story of a driven selfish businessman who dies, finds himself in heaven – and is then sent back to this life as a dog.  I’m hired as an authoritarian and critical angel, open in his skepticism of God’s plan and of its likely success.

It’s just a days work for me, a Saturday shoot, and it’s such a low budget effort.  As I drive the canyons north to the location, I realize I’m entering a ‘dead zone’; there will be no cell phone reception for the next 10 hours…and I’m wondering why the hell I took this gig.  Certainly not for the scale plus 10% fee, probably not for the projects commercial or artistic success…so why, Tucker?  Guess I had nothing better to do on Saturday…and even Spielberg started somewhere; you never know where that next important auteur will first appear.  The people are nice, and the crew is still cheerful on this next to last day of shooting; day 11 of 12.

I work my way thru hair and make up, grab a little breakfast and while away the time spent lighting the set by sitting on my trailer steps, noodling on my guitar and engaging the passing crew and cast members.  Eventually we’re ready, I slip into my ‘angel drag’, a voluminous ivory choir robe, and approach the set.  I’ve yet to meet Gary, but todays scenes all take place in ‘heaven’.  This is Gary’s first appearance there after death, later, his transformation into Quigley the dog (a trio of talented and high strung Pomeranians, accompanied by their high strung trainers), and his final return to heaven for judgement.  My director has already gotten my attention by announcing how thrilled he is to see me; he’s decided to “write lots of new lines for me in these two scenes”.  O Joy, O Rapture…..NOT!  No matter, I’ll soon be re-writing them to make sense in English, but there’s plenty of time ahead on the set to memorize them.  Truth be told, if your names not Ibsen, Shaw or Shakespeare, odds are I’ve tweaked your dialogue over the years.

I notice the arrival of several containers of ‘stage smoke’ and shudder, knowing the outcome of filming in a closed space with this chemical pollutant…coughing, tickling, sneezing, and post-nasal drip for the next few nights sleep.  So it goes.  Heaven requires lots of clouds and fog.  I’m chatting with the make-up woman, Katt; we’ve both spent time in Europe and we’re comparing notes about growing up and going to school abroad.  My fellow angels approach me and tell me I’ve just missed ‘the briefing’ Gary Busey delivered to them, regarding the proper conduct of angels.  Oh my…  A few minutes earlier, as Gary’d left the stage to return to his trailer, he looked at me, holding my hemline above the dusty ground and asked, “He’s not going to be wearing those blue jeans, is he?”  The director assured him they would never read on camera thru the fabric of my robe, and I playfully called out to him, “You don’t get to vote on the dress code in heaven, Gary.”  He suddenly wheeled and went a little berserk, “Hey, I’ve been there!!  I know!! OK?”  And continued on to his trailer…

The fuck was that about?  (Like most people, I knew that Gary Busey had a devastating motorcycle accident several years before; one that left him near death, perhaps brain-damaged, and evidently with a newly found respect for the benefits of living.)  But I was kinda stunned by the vociferousness of his response; this was clearly a hot button issue.  I shook it off and returned to my conversation with Katt.  Some time passes, we’re called to the set, and as I’m introduced to the crew, Gary approaches me and says, ‘You missed my chat with the other angels. Now here’s the thing, they’re full of love and light, they don’t move, they offer incredible comfort and affirmation……” This continued for some time.  My director/writer stands silently nearby; I envision him cowering behind sandbags to avoid the impending firefight.  As Gary pauses for air, I point out that while much of that is interesting, it has little to do with the text of our scenes.  In point of fact, there will be considerable judgement and criticism, because he’s been a real dick while on earth.  Gary becomes even more manic; eyes and large teeth flashing.  I’m unsure whether he is about to take a punch at me, burst into tears, or storm back to his trailer.  He is angry, he is fearful, he is disapproving, he is manifestly unhappy…and I wonder again, just what the fuck I am doing in this erratic madness on a Saturday afternoon.  After several false starts, I succeed in communicating with him.  “Gary, Gary GARYI don’t know you, I’m not judging you, this is not ABOUT you, I’m TALKING ABOUT THE CHARACTER YOU’RE PLAYING IN THIS MOVIE !”       OK!!?

This clarification effects a transformation in Mr. Busey.  He is suddenly calm, effusively apologetic, enthusiastic, approving, embarrassed (as well he fucking should be) and we proceed to set up the scene and begin the long days work ahead of us.  From this point on, Gary is my new best friend, he loves everything I do (as well he fucking should, because I seem to be the lone voice of reason amidst a sea of battle scarred cast and crew.)  Apparently, this has been a daily occurrence for the past 11 days; Gary at some point or another, flipping out and going off on anyone that managed to push his button, of which there appear to be several.  It’s immediately clear to me that he’s committed, excessively involved in ALL aspects of this production, passionate about finding the truth and consistency.  He’s also very talented, which was never in doubt, at least to me, I’d seen BUDDY HOLLY.  It’s ironic, we’re quite similar in many ways; we both love music, are both fanatic about the work, both survivors of life-altering, near death experiences.   It seems likely that this project, about a man given a second chance in life, speaks to him in an intensely personal way.  And I think he sometimes forgets that this script is not “The Gary Busey Story.”..it’s just a movie with a theme that is close to his heart.

All this was quickly clear to me, so I had no problem with letting go of the drama and moving on to the work.  But for the next 5 or 6 hours, one by one, cast and crew approached me singly and discretely, to apologize for his behavior and thank me for mine; each wanted to take my hand or hug me.  It was really quite touching.  I appreciated the expressions of respect and gratitude, but what I’d done was not really all that daring.  I’ve faced down much bigger stars in much bigger projects under similar circumstances…and the simple truth was: Today, I didn’t give a rat’s ass.  I had nothing at stake here, not my ego, not my work, not my wisdom…and this was a job and aggravation I could happily do without.  So I dealt rather forcefully and clearly from a position of genuine strength.  Gary’s not the only man to face his death and survive; and he’s not the first…been there, done that.  People can benefit from his experience…but he can learn from others, too.  And the sooner he realizes that, the sooner his epiphany will become an asset in his life.  Right now it seems to be a weapon in his considerable arsenal, and perhaps a liability in his interaction with others.  IMHO.